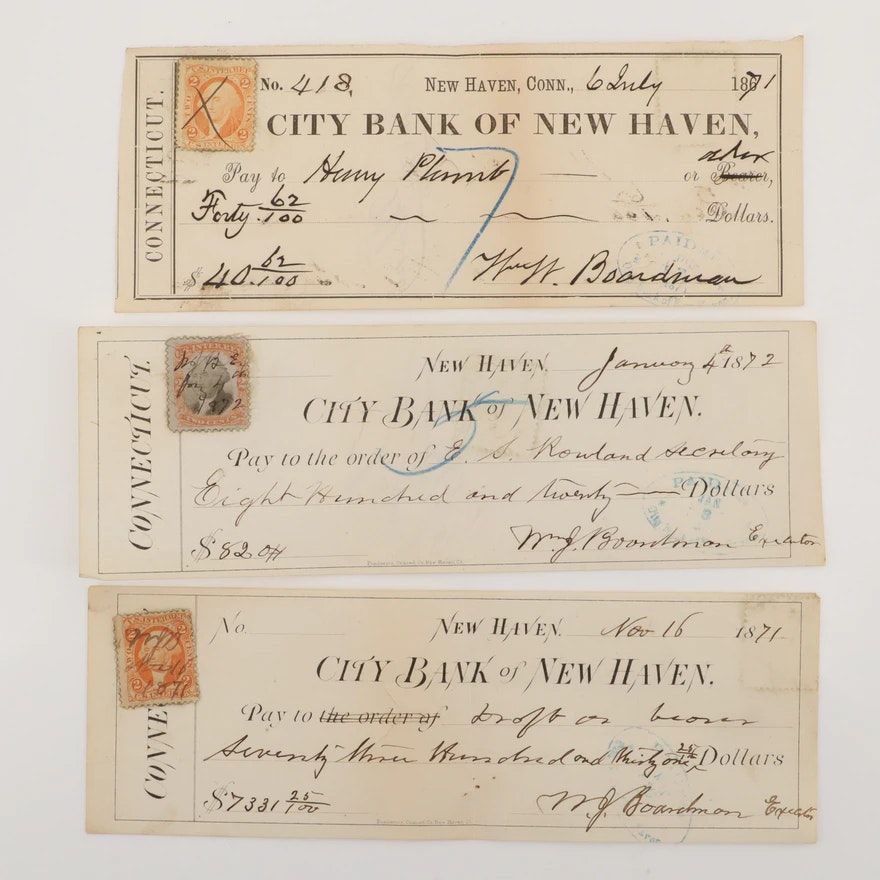 Last week, I wrote at length about Banks as “debt monetizers”. While this function is important, if that were all that banks were today (or were in the past) they would take up a far smaller place in the public’s imagination. Instead, banks have historically provided a host of social functions. They buy and sell physical cash, notarize documents and provide basic financial & investment advice to businesses and households. They provide safe keeping for physical possessions. For our purposes today, one of their most important functions they serve (and have served) is as payment processors.

Think of a small town in the late 19th century in the United States. How many important institutions would there likely be in this town? Probably a half-dozen, maximum. How many of those institutions would be commercial in nature? How many could process a payment? Banks held such an important place in the public imagination because you could not only monetize your IOU, but take that newly created money and use it to make a payment across great distances or to another individual in town.

A basic element of this payment-making process is security. In principle we could all make payments to each other in physical cash. However, this would not just be cumbersome but also be unsafe. If physical cash is stolen, it's impossible to recover the funds. If instead someone stole a physical check, they still have to fool the bank into thinking they are the person that the check is written out to in order to receive funds. A typical check is an order to a bank by one of its customers to make a payment to a specified individual on presentation of the check out of the customer’s account. While appearing on bank paper, a check is really an IOU of an individual- albeit validating that the account holder is a customer in good standing (at least as of recent times). These kinds of analog algorithms provide an important layer of protection.

Another important element of the historically unique place in the payments system of banks is their associational relationship to other banks. Other payment processors were (and are) straightforward fee-for-service businesses. While not often conceived of this way, fee-for-service payment clearing is “non-par” payment clearing. 100 dollars in one place is only worth 98 dollars somewhere else. Banks, in contrast, are in many circumstances in a position to offer par clearing and avoid fee-based banking (we’ll return to the modern era at the end of this post). They are able to offer this service because of the returns they earned on their asset holdings. In other words, the debt monetization business lets them “subsidize” payment processing. Yet, while banking as a whole can afford to subsidize payment processing, it is difficult to coordinate this subsidization with other banks. In the 19th century United States, the coordination mechanism was bilateral (and sometimes multilateral) agreements between banks to process checks for each other at no cost.  To clear local check payments local banks formed associations like clearinghouse associations. Correspondent relationships with non-local banks were used to collect on non-local checks at no fee.

These agreements usually involved a correspondent bank not only accepting their own checks at no cost, but also the checks of banks within short geographic distances. Yet, these banks may not actually have clearing relationships with those banks. In that case, they sent the checks to another bank which agrees to accept those bank’s checks in payment. The hope is that, eventually, the checks make it back to the original bank and successfully clears. This is a time-consuming and cumbersome process which partially motivated the formation of the Federal Reserve. To fully grasp just how time consuming and cumbersome this process is, I’ve written out a very large T account where a check has to work its way through 4 banks in order to be processed. There are stories of checks requiring 11 banks and 11 days to be processed. Imagine you sent me a check and I went to my local bank to deposit it.

During the time that a bank would wait for a check to clear, there would be a “float”. The check would be accounted for as an asset of the original bank but they wouldn’t have available funds related to the check to clear transactions with other banks. Recall that in the first instance, a check is a personal IOU of a bank customer. As such, it takes time to know whether that IOU will be honored. Sometimes, at the end of this cumbersome process the bank lost money because the check issuer didn’t have sufficient funds in their bank account. Yet banks tend to give customers access to those funds today- at least part of those funds. This delay between an interbank transaction’s initiation and its final clearing is one of the major uncertainties, and costs, of payment systems. The desire to shorten the time between initiation and final clearing comes from the desire to reduce these uncertainties. The ultimate solution to these problems would be “real time gross settlement”, which wouldn’t require netting payments or waiting for clearance at all. There are regular pushes to implement real time gross settlement in the U.S. payments system today.

As the above example illustrates, there can be quite significant costs in operating a payments system. Not only that, but these costs are not necessarily evenly distributed across the banking system. One of the chief historical tensions in banking systems is that at the aggregate level there are more than enough returns from the loan making business part of banking to subsidize payment systems, that doesn’t necessarily apply at the individual level. Some banks have far more of a loan making business relative to payment processing costs and other banks are largely payment processors with a relatively minor loan making business. For the banks that were largely payment processors, the desire to clear payments on a non-par basis in order to turn a profit was great. This tension manifested itself as a city-country divide, as you can imagine rural areas tend to have a lot of payment processing needs and not many profitable areas to lend to. The Federal Reserve in the 1920s tried to end non-par clearing by collecting “non-par checks” and presenting them en-mas at the teller windows of banks. This was ruled illegal in 1923 by the supreme court.

These kinds of fights over how to allocate the costs of payment processing are recurrent. Today we’re having these fights again, especially as banks increasingly don’t serve larger and larger parts of the population as payment processors. They’ve saved on a lot of these costs by simply making it prohibitively expensive to access the payment system, despite all the public subsidy they receive. Fee income has become an important source of profit for the largest banks. Meanwhile non-bank payment processors have exploded over the last four decades. The banking system’s failure in this area has led to the growth of a host of predatory payment processors from payday lenders to “financial technology” companies. Not only is their business mostly payment processing (and thus there isn’t any loan-making business to cross-subsidize payment processing), their average costs are higher since they are left with a vulnerable and relatively poor customer base. As a result, the cost of this system is high (though not as high as the conventional banking system).

Given the current state of payment processing and the possibility that the federal government can issue its own digital cash instrument, the question of whether the loan-making business of baning needs to be so tightly related to payment processing is reemerging. A combination of greatly expanded postal service payment processing (including checking accounts) with direct access to the Federal Reserve’s payment system and digital cash could be sufficient at displacing private payment processing. It is also desirable for returning our monetary system to par clearing and protecting those with limited or no payment processing access. Hyman Minsky (along with coauthors) once said that “A recognition by the government that it is the payer’s responsibility to pay its debts in a money form that the recipient can use implies that the government needs to absorb the charges levied on recipients of its checks for the exchange of checks for currency”. This principle can be easily extended to the public absorbing the costs of the payments system in order to ensure full access and depriving banks of the ability to collect fee income from their customers.

My colleague Rohan Grey has a proposal to greatly expand the types of collateral the Federal Reserve will accept from banks for “discount window” loans in order to facilitate banks capacity to forego private finance and instead focus on their “debt monetization” function. Much later on in this series, I’ll describe this proposal in detail. For now, it's simply important to understand that given our current level of technological development, our current monetary institutions and the wider political context, the dream of separating payment processing from credit creation has been revived. Separating these functions could serve to greatly reduce the power of banks over our society and to highlight the inherently political and public nature of their debt monetization role.