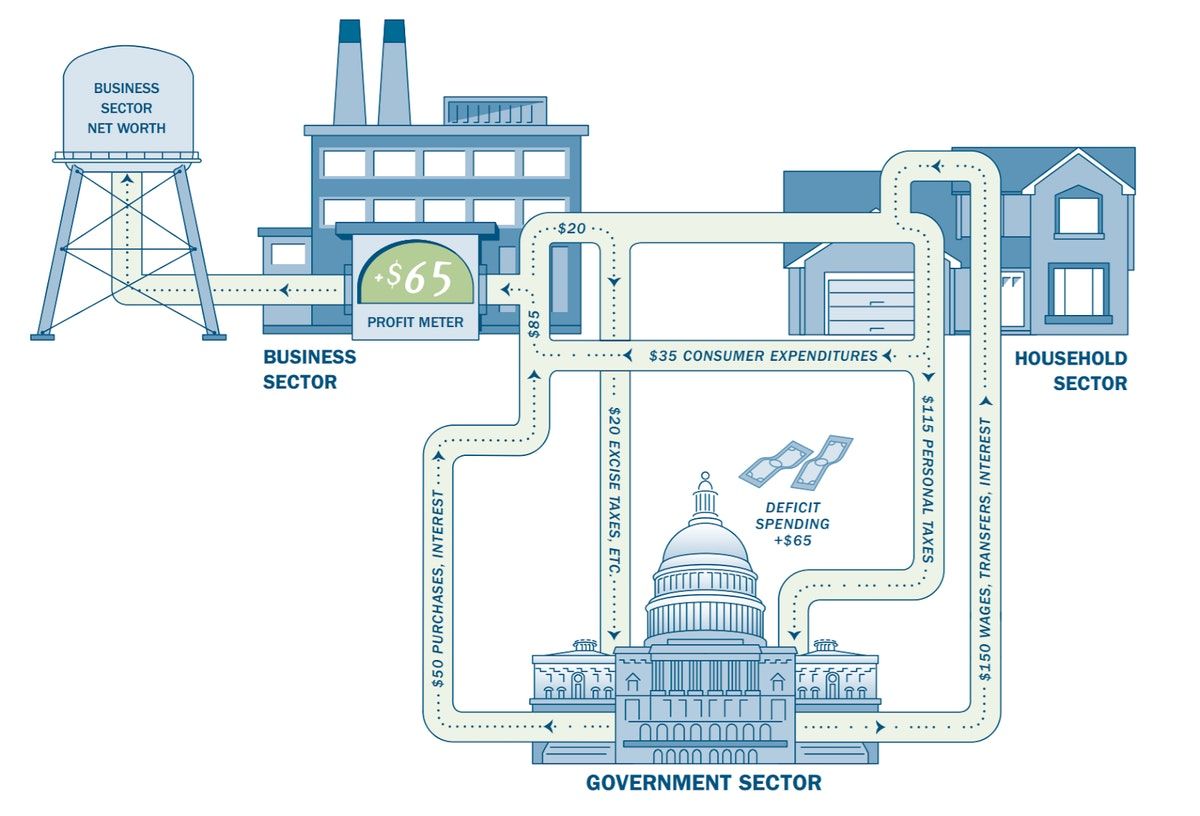 Periodically, an interaction on Twitter reminds me that it is worthwhile to make implicit knowledge among my colleagues explicit. There are important points which are well established among the economic policy analysts I regularly speak to which still need articulating to the new, much wider, audience that I now have. A couple weeks ago, that reminder came in the form of a twitter interaction with Gaurav Saroliya, the Director of Global Macro Strategy for the large economics forecaster “Oxford Economics”. In reply to another tweet by me, Gaurav argued that government budget deficits had the potential to lower corporate profits. They would achieve this outcome by requiring households to save more, thus presumably lowering household spending, and thus profits.

I argued that this reasoning was based on an accounting error. After a very brief twitter interaction, in which I cited the Jerome Levy forecasting center publication “Where do Profits Come From?”, Gaurav gracefully and publicly issued a correction. For those mercifully unfamiliar with that website, this is almost unheard of on Twitter.

Still, the interaction stuck with me. It stuck with me because it reminded me just how easy it is to make the mistake Gaurav made. In fact, most readers are probably still unsure why what Gaurav said was wrong. Without having the right framework to think through these problems, very smart people say things about aggregate profits and deficit spending which are inconsistent with macroeconomic accounting. So today, I’m going to be explaining one of the most important accounting statements in macroeconomics- the Kalecki-Levy profits equation.

Where Do Profits Come From?

If you’re very interested in the topic of today’s article and want to know more, I highly recommend reading The Levy Institute’s publication “Where do Profits Come From?” I’ll be reposting a few of their great illustrations to make these accounting relations feel more real.

By way of background, it is worth saying something about the two men the equation is named after. Michal Kalecki was a Polish economist, who came to the analysis of macroeconomic accounting presented here by reading volume 2 of Marx’s Capital. Kalecki is known as a contemporary of Keynes, who came to many of the same ideas independently. Despite being his contemporary, today Kalecki is considered a foundational “Post-Keynesian” economist. By contrast, Jerome Levy was an American businessman who derived the profits equation independently, in pursuit of the knowledge of where his own profits were coming from.

For many, it is of interest that two men of such differing political views came to such a similar analytical framework. The relationship between Kalecki and Levy embedded in the Kalecki-Levy profits equation continues to this day in the form of the Levy Economics Institute at Bard College, where Hyman Minsky spent the last years of his life. (Minsky relied on the Kalecki-Levy profits equation in developing his own financial analysis of capitalism, work which I will return to another time).

So what actually is the Kalecki-Levy profits equation? It’s simply an accounting statement that, in strictly an accounting sense, “explains” where total nominal profits come from, financially.

In other words, we’re not talking about what physical inputs in production create value, or whether they do at all. That is a different discussion. One of the most basic lessons in the macroeconomics of accounting is that for every seller there must be a buyer, and for every deficit there must be a surplus. The Kalecki-Levy profits equation puts these lessons to good use to figure out where the surplus businesses receive come from.

That said, the surplus being measured is not a purely financial surplus. Non-financial value also counts towards aggregate profits. This holds because, well, it counts towards individual company profits. Investment Expenditures are not equivalent to firms shedding profits. A company that spends 100 dollars purchasing a machine now has a machine worth 100 dollars — those funds spent are not a loss. Over time the expenditure on that machine will be recognized as a cost, but there won’t be any associated expenditure at that time.

This is the business accounting concept known as depreciation.

The upshot of all this is that before you add governments, foreign sectors and household saving, the basic source of measured profits for the business sector is the business’s own investment expenditures.

Still, sometimes I regret that people learn about this (or John Maynard Keynes’s similar accounting relation investment=saving) before learning other elements of macroeconomic accounting. Investment expenditures only increase the net-worth of the private sector because the investment goods being created or purchased have monetary value. Put simply: the financial net-worth of the private sector doesn’t change because of private investment. It seems to me that explaining aggregate financial profits would be a more important starting point. In other words, identifying flows that can increase the business’s sector’s financial net-worth. This would allow us to disentangle learning macroeconomics, from learning individual business accounting.

There is, of course, another flow which can flow back into the business sector as revenue, but doesn’t flow out as a business expense — dividends.

Dividends are based on measured profits and considered a “distribution” of profits. As such, dividends  flow out without being treated as expense. But they could possibly finance a purchase from a business, thus creating business revenue. Of course, many dividends flow into the accounts of institutional investors who aren’t going to increase their expenditures (or payouts to households) because their current measured income has increased so in practice only a small portion of dividends flow back to businesses in the form of sales. We’ll tackle this question more when we get to households. It’s important to emphasize that neither of these flows can increase the financial net-worth of the business sector. So at this point, financial profits are still zero.

How Can Governments Boost Profits?

Next up, we have something that Modern Monetary Theorists are famous for focusing on —how government budget deficits can generate financial surpluses for the private sector.

If you look at the graphic below closely, you’ll see an illustration of a point I’ve been making over and over: cash payments to households is indirect financial support to businesses. You give them money, they’ll pay their rent. You give households money, they’ll make purchases. You give households money, they’ll pay interest which becomes business profits (paying down principal is a form of household saving, a point we’ll discuss below). However, readers shouldn’t take the lesson from this that all government budget deficits do is goose profits. They can also provide more financial security to households themselves. And from my perspective, clearly should.

This brings us to the question of households. Most of the time, households are a  financial “drag” on profits, because their saving siphons off funds. This holds equally true whether we’re talking about an employee of a business who doesn’t fully return their wages to the business sector, or an employee of the federal government who saves part of their salary. These other flows that would otherwise increase (or sustain) profits are being shrunk before they get to businesses.

It’s important to emphasize this last point: if all other things were equal, a budget deficit would simply increase profits and household saving would reduce them. But not everything is equal and with macroeconomic accounting, you can’t hold one sector’s financial position constant.. Sometimes shifts happen between non-business sectors that leave profits untouched all together. The stimulus checks along with the supplementary unemployment benefits provide a good example of this. These cash payments weren’t immediately spent by households in the month they were received, which led to a big jump in the personal saving rate. Increasing government budget deficits straightforwardly increased household saving, without any effect on business profits.

Of course, that wasn’t going to last.

Households started spending the emergency cash payments which increased sales (and thus profits). And if the state now cuts off expanded unemployment insurance while not renewing the “stimulus” checks, households will lose their temporary financial layer of protection. As an immediate and unavoidable consequence, business sales (and profits) will continue their nosedive. Where else would business sales pull their profits from?

Again, what we’re looking at right now are accounting relations. A strict focus on these has some obvious limits. They don’t tell us what is causing what. But they structure our thinking, so that we can identify causal relationships more clearly. Think of this as an exercise, to help us to think in macroeconomic terms.

Last, but certainly not least, there is the foreign sector. From the point of view of the “domestic country” the surplus of the foreign sector always appears as a deficit. Specifically, the current account deficit. If not offset by, say, an increase in the government budget deficit, then current account deficits drain profits from the business sector. Meanwhile, for countries like Norway or China, large current account surpluses are a source of business profits. They facilitate both the private sector and the public sector running surpluses. These countries couldn’t do it without the deficit spending of the rest of the world.

We now have the full Kalecki-Levy profits equation, and its financial profits equivalent:

With some basic algebraic manipulation you can derive from the profits equation — what’s known as the sectoral balances equation. This shows us clearly that for every surplus, there must be a corresponding deficit.

With these two accounting equations we can learn a lot about how an individual economy — indeed the world economy — functions. They also help us to avoid errors which are very easy to make when we don’t have these two equations (and the relations underneath them) at the forefront of our minds. They don’t tell us everything — we still need to know how governments, businesses and households actually behave — but this is a good start.

Those who share my passion for monetary political economy may have found this a helpful refresher. But I suspect a lot of you have learned a lot just by reading this short summary. I really recommend spending more time with the longer pamphlet “Where Do Profits Come From?”, which is where I took the illustrations for this post from. (They have more great illustrations in there). As an exercise, readers should take some time to reflect on all that they’ve learned, and provide their own answers to what Gaurav’s mistake was.