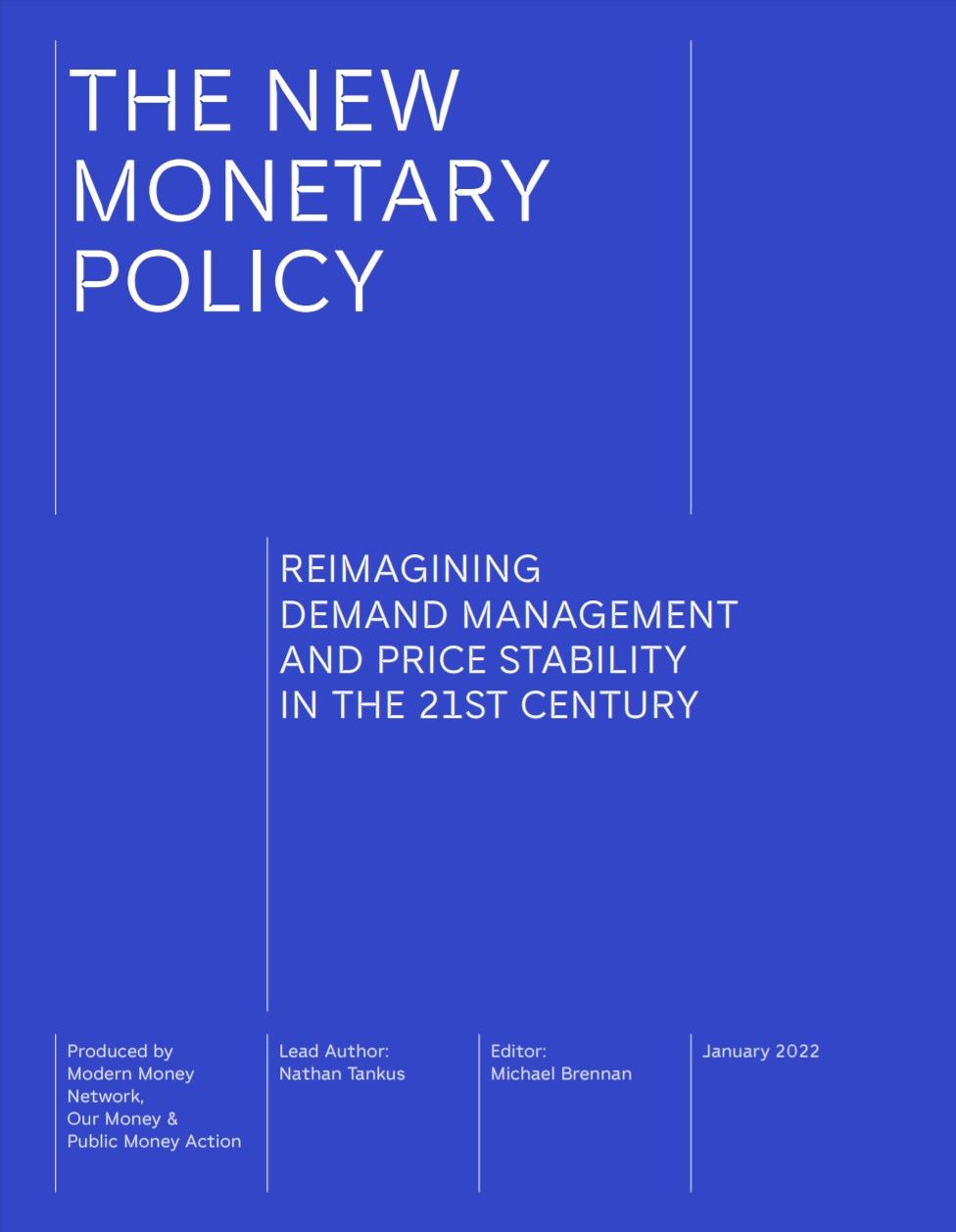 I don’t spend a lot of time writing about Modern Monetary Theory on Notes on the Crises. Regular readers will know that insights from MMT inform all my writing on this newsletter on various different topics. But I prefer to focus on my analysis of unfolding situations, rather than arguing about the framework that lies behind my thinking. Nonetheless, in other contexts this is an important part of my work. I am the research director of the Modern Money Network, after all. A major project that I took on as lead author preceding the pandemic came out of the debate over MMT in 2019. (As an introduction to Modern Monetary Theory, I wrote out a talk on the subject originally delivered to a Federal Credit Union, which you can find here)

It is hard to remember those long ago days but, at the time, the debate about Modern Monetary Theory was over whether it makes sense to say that inflation and the availability of physical resources was the main constraint to expansionary fiscal policy. In contrast, mainstream commentators came out of the woodwork to say no, if you run deficits that are too big, even if there isn’t an issue with inflation, the national debt will get out of control and bond markets will “punish” you. Some even claimed that the Trump tax cuts meant that the U.S. had “run out of ammo” for the next recession. In their framing, fiscal policy was supposed to manage the national debt and monetary policy — specifically interest rate policy — was supposed to manage the economy and preserve full employment plus price stability.

More sophisticated commentators claimed that MMT may be right — but it didn’t matter much. Josh Barro, who was at New York Magazine at the time, claimed:

If the government prints and spends money when the economy is at or near full employment, MMT counsels (correctly) that this will lead to inflation, and prescribes deficit-reducing tax increases to reduce aggregate demand and thereby control inflation. See how we have ended up back where we started? Whether you take a Keynesian view or an MMT view, if the government spends more, it’s likely going to need to tax more, sooner or later. [...] Whatever the Federal Reserve’s demerits, the idea of depending on Congress to pass surplus-generating tax increases in order to keep the economy stable and prevent runaway inflation gives me hives.

Barro’s piece signaled that we were in a new phase of the debate. While many mainstream economists embarrassingly held onto the idea of the national debt “spiraling out of control”, it was clear that more and more commentators would gravitate to Barro’s idea. They came to argue that it doesn’t matter much whether you are “balancing the budget” or “budgeting for inflation”.

My colleagues and I saw various dangers in this new framing. For one thing, while we thought a focus on inflation and physical resources was a vast improvement over a focus on the size of the national debt, we had a very different view of prices and aggregate demand than mainstream commentators. Policymakers who naively focused on headline inflation could miss key bottlenecks in specific sectors which wouldn’t be solved by throttling demand (whether that throttling came from fiscal policy or monetary policy). Further, there are a variety of cost-based and market structure-grounded reasons that prices can increase when output is widely available.

Even when aggregate demand and income growth is the main cause of shortages and price increases, it does not follow that the only possible response is raising taxes or fiscal policy. Restrictive financial regulation, or even non-financial regulation can restrict demand (that’s a point I will return to). Later on, I would coin the phrase “non-fiscal payfors” to emphasize that in “demand terms”, expansionary fiscal policy could be “offset” by restrictive non-fiscal policy rather than tax increases or other spending cuts. Contra Barro, this is a very different world than the one envisioned by mainstream economic policy or the partisan economists who populate its conventional wisdom.

To head off Barro’s view becoming the new conventional wisdom and preemptively clarify these misunderstandings (as well as confusions I discuss below), UMKC professor Scott Fullwiler, MMN president (and now professor) Rohan Grey and I wrote an op-ed for the Financial Times. In discussions with our colleagues at the organization Our Money, it became clear that they were interested in financing a report to flesh out the idea that tightening financial regulation could serve as an alternative to both interest rate hikes and tax increases. I became lead author and spent a lot of my time in 2019 and early 2020 leading up to the pandemic working on this report. Thanks to my colleagues at the Modern Money Network, particularly Michael Brennan, I am proud to announce that “The New Monetary Policy: Reimagining Demand Management and Price Stability in the 21st Century” is finished and ready for public consumption.

The New Monetary Policy is focused on how the budgeting — and policymaking — approaches used by government agencies, particularly the Congressional Budget Office, would need to change and adjust in order to incorporate and take full advantage of non-fiscal payfors. It examines the various different elements of contemporary financial regulation and considers which financial regulatory tools would be most suited to managing demand. Finally, it recommends two suites of financial regulatory tools, geared towards different political contexts. One suite, dubbed the “Build Back Better” approach, focuses on how financial regulation could come to serve a demand management role without major disruptions to the current approaches to budgeting and monetary policy. It is meant to exemplify that policymakers can benefit from MMT insights about managing aggregate demand without signing up to a Permanent Zero Interest Rate on Government debt (PZIRG) policy.

Our more “aggressive” policy suite, dubbed “Green New Deal” monetary policy, is meant to show the kind of demand-management tools available via financial regulation if policymakers (and the public) become interested in freeing up a vast array of physical resources for Green New Deal mobilization. We also emphasize that avoiding U.S. interest rate hikes is especially important in the context of the United States, where dollar interest rates impact countries deeply indebted in dollars, both in dollar terms and in terms of their exchange rates. Whether it is the pandemic response or the climate response, raising dollar interest rates is inconsistent with tackling these global problems on a global scale. The planned Federal Reserve interest rate hikes are already having adverse impacts on much of the rest of the world.

There is much more in The New Monetary Policy than I can go over here. That’s why readers should read it! One thing, however, that the report is not about is our current “inflation” situation. As I stated earlier, it was mostly written in 2019 and has only been updated in the places where contemporary circumstances are the most critical to the argument. While we flesh out more of our thoughts about the “non-demand” elements of inflation and price stability, that topic is not the main focus of this report. The role that competition law and other areas of law that directly impact business price-making have in aiming for a true full employment economy with price stability is a subject that deserves its own paper or report. My work with colleagues Sanjukta Paul and Luke Herrine will certainly play a key role in a full developed framework answering those questions. In the meantime, I am going to write about recent arguments over this topic later this week, and the more general arguments over pandemic-related price increases.

What I can say here is that the pandemic has vindicated many of these points. Concerns over where the United States would “find the money” (rather than “finding the resources”) for various fiscal initiatives dissolved in the pandemic as the Federal Reserve launched an array of programs (which I became well known for). Congress also passed trillions of dollars in spending initiatives without offsets of any kind. In fact, just yesterday Professor Stephanie Kelton was profiled in a New York Times Profile entitled “Time For a Victory Lap*” on this exact point. Meanwhile, the pandemic became a major real world example of non-financial regulation contracting demand throughout the economy. In other words, pandemic measures reduce demand which actually required expansionary fiscal policy to “offset”.

As if this all were not enough, our concern that the mainstream view that inflation is only caused by excess aggregate demand would mean particular supply chain bottlenecks would be used to justify demand restraint has been prescient. The business press is now daily focused on the intimate details of supply chains. That new focus is based on the idea that you need to understand those intricacies to understand wider economic conditions, and what would be the most effective policy response.

We were worried about how these potential future bottlenecks would play out politically at a time when few other commentators were focused on such issues. Now president Biden commonsensically says: “if car prices are too high right now, there are two solutions: You increase the supply of cars by making more of them, or you reduce demand for cars by making Americans poorer.” Naturally, he concludes he endorses the former. Biden’s Federal Reserve, however, still appears poised to pursue the latter.

The New Monetary Policy is a major step in laying out an alternative to the orthodox policy consensus — and I look forward to producing more work in the future that fleshes out that alternative even more.