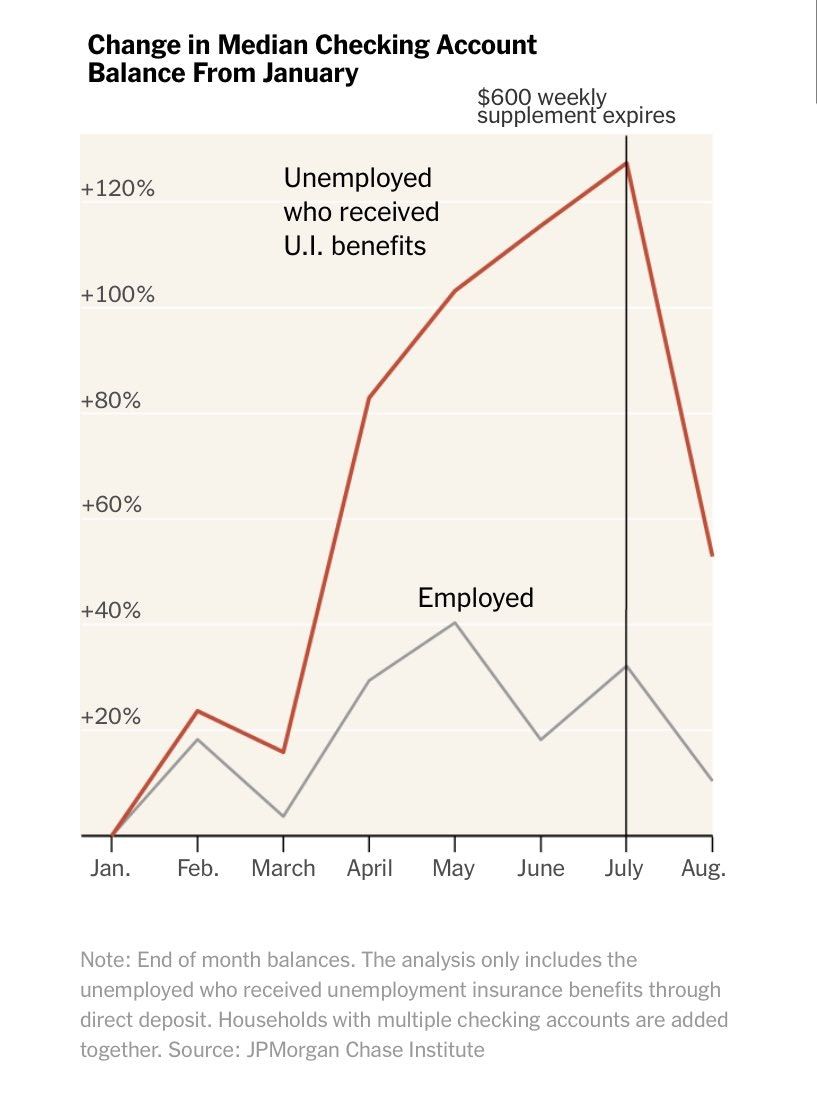 I haven’t written in detail about the prospects of a congressional fiscal package since the beginning of August. Since we’re two weeks out from an election, this seems important to revisit. Long time readers will remember that I’ve been an aggressive advocate of large fiscal support to the economy so that there weren't major income and financial impacts from having to quarantine. As the prospects of a new deal become more remote, I added my voice to the larger calls for a new package. I’ve outlined the damage that could be inflicted by not having a deal. I ended this run of articles with a piece in the Guardian warning against the terrible prospect of congress passing another fiscal deal. And especially not extending the supplemental unemployment insurance.

When it became clear we weren’t getting a fiscal package, I stepped back to analyze the “Fiscal Cliffication” of our economic policy. As I explained in that article, the Republican party has many political incentives not to pass a fiscal package. These hold especially if they strongly suspect Donald Trump will lose in November. Meanwhile, Democrats also have political incentives not to engage in a deal. I think that the political analysis in that piece holds up, and explains what has been going on for the past two and a half months. As I said then:

While this is disastrous for the country at large, the political incentives each party faces are going to lead to intensifying fiscal cliffs for the foreseeable future [...] Without major and extreme change to our politics, we’re much more likely to see half-hearted and inadequate short-term extensions to the most minimal support to households and businesses, for as long as legislation requires inter-party cooperation.

Clearly, however, the politics of a new fiscal package have now evolved. It is beyond the scope of this piece to assess all the complex twists and turns of the negotiations. For that, you should be reading the excellent coverage by Jeff Stein at the Washington Post. The most important thing to understand is that the negotiations have not moved onto the main hurdle — Senate Republicans. While Democrats have been able to get the Trump administration to improve it’s offer in terms of dollar amounts, it’s not clear how meaningful that is without Senate Republicans participating. Negotiations have stalled at a back-and-forth between Trump, and House Democrats. House Speaker Pelosi’s stated position as of this writing is that she is not willing to accept the Trump administration’s proposed 1.8 trillion dollar offer. This offer includes another round of stimulus checks to every American, expanded unemployment insurance, and 300 billion for state and local governments.

Pelosi’s stated objections are firstly that the Trump administration is asking for too much discretion in allocating funding for coronavirus testing and secondly that they haven’t agreed to set terms on how state and local government support would be allocated. There are also a range of other issues where the terms and dollar amounts are not set, such as for childcare and a refundable tax credit for lower income Americans. She is also strongly objecting to the controversial idea of providing businesses a liability shield from coronavirus related lawsuits. This is a stated “red line” for Senate Majority Leader Mitch McConnell. While these issues are significant, it is not clear that they are worth holding up a package while millions of households are facing starvation and eviction.

This is especially true as the main leverage Democrats have is the looming election. An advantage which (obviously!) disappears once it is over, in just two weeks. Nonetheless, it is important to step back and remember House Speaker Pelosi’s stated goal in these negotiations — to get as big of a package as she can. Meanwhile, Republicans are looking to skimp on economic support. Her “messaging” bill was the 2.2 trillion dollar HEROES act. By contrast, Majority Senate Leader McConnell’s “messaging” bill is a minimal 500 billion (with no aid to state and local governments.) I could offer more detailed opinions on the complex politics surrounding these nearly lapsed negotiations, but I don’t really see that as my role. But they are important to understand for those who are keenly interested in our economic situation, as it stands today.

Let’s consider the lay of the land for Covid-struck America, after existing stimulus efforts. This will give us some idea of what hangs in the balance.

Overall sales didn’t instantly fall off after expiration, because the supplementary unemployment benefits were so large that they facilitated many receiving unemployment actually accumulating savings. There were also the 300 dollar FEMA payments that Trump authorized by executive order. These ran out in various states throughout September. The New York Times had some good reporting on a study based on JP Morgan bank accounts that showed the median checking account of those receiving direct deposits of unemployment benefits rose significantly early on, and then fell off significantly in August. The fall off in savings is probably less dramatic for the under- and unbanked receiving prepaid debit card balances or checks, with consequently larger drop-offs in spending when supplementary payments expired. A New York Federal Reserve survey from June showed similar results for the early part of the pandemic.

A similar story is told in the aggregate data. The saving rate peak coincided with the beginning of the stimulus check payments and supplemental unemployment benefits. As the stimulus checks were exhausted, the saving rate fell. It’s not possible to get a complete picture yet: we don’t have data for September, which will likely show larger declines. With the emergency FEMA payments declining, the desperation that has already racked millions of families is spreading — and so is the virus.

For now, the eviction wave I was most worried about in July seems to have been largely held off by the CDC eviction moratorium order. Though it’s hard to really tell how true that is given that we have no aggregate data on rental evictions, or homeowner foreclosures and evictions. Renters must submit a declaration to their landlord, which requires them to be aware of the CDC moratorium, to be able to go through the process. It also requires them to appear in court, and have proof that they submitted the declaration. This barrier makes this protection flimsier than it might seem after a glance at the moratorium order. Practically speaking, the “process servers” hired to supposedly deliver summons regularly lie about doing so, and are taken at their word by judges.

Even with successful recourse to the CDC moratorium, this moratorium doesn’t cancel rents. This means that we could get a spike of evictions January 1st. If the moratorium is extended, that still doesn’t deal with the looming threat of mass evictions in the longer term.

Which brings me to the major concern we face today. With each passing day, it becomes increasingly likely that there will not be any bill passed before the election in two weeks.

This would be an unqualified disaster. Without any passed legislation before the election, Democrats lose all leverage to push Senate Republicans to the table and the Trump administration will lose all interest in passing anything- especially if Trump loses.

This means we could possibly go until February 2021 before seeing another economic package. Worse, that package may even require a Democratic senate to become law. It’s possible that even that scenario is optimistic — it could then take a significant amount of time for Democrats to agree on a package among themselves. What happens to millions upon millions of people in that agonizing waiting period? A winter filled with a third wave of Coronavirus and no economic support to individuals is a recipe for absolute disaster — over 200,000 Americans have already died.

I hope I’m wrong — that a hasty deal will be struck, and that a fiscal package will become law in the short 15 days we have ahead of us. But I’m not optimistic.