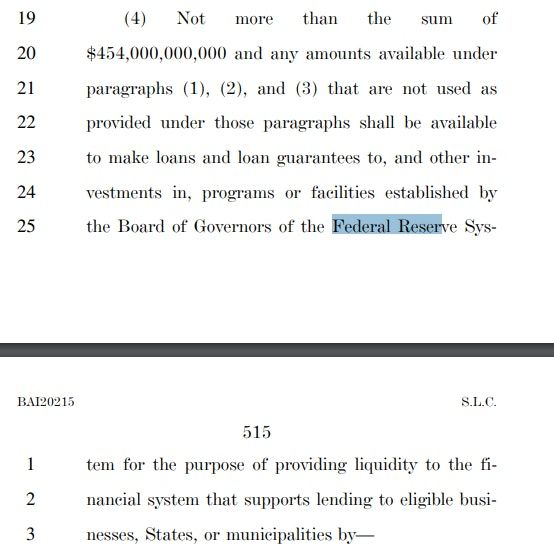 Earlier this week I wrote about the Trillion dollar platinum coin. Using the coin to fund government spending is often dismissed as an “accounting gimmick”. Yet, accounting gimmicks are already at the center of the Stimulus Bill being debated in congress tonight. 454 billion of the reported 2 Trillion dollars is going to “make loans and loan guarantees to, and other investments in, programs or facilities established by the Board of Governors of the Federal Reserve System”

This is an accounting gimmick. Yet Larry Kudlow (director of the National Economic Council) points to it as one of the most important provisions in the bill.

And finally, I want to mention, the Treasury’s Exchange Stabilization Refund.  That will be replenished.  It’s important, because that fund opens the door for Federal Reserve firepower to deal a broad-based way throughout the economy for distressed industries, for small businesses, for financial turbulence.

You’ve already seen the Fed take action.  They intend to take more action.  And in order to get this, we have to replenish the Treasury’s Emergency Fund.  It’s very, very important; not everybody understands that.  That fund, by the way, will be overseen by an oversight board and an inspector general.  It will be completely transparent.

Why does he think it's important? It’s not exactly clear but it seems that the Trump administration along with the Federal Reserve believe that they do not have the authority to launch the facilities they’ve been launching (partially described in the last post) without special purpose vehicles created by the Treasury. That doesn’t explain why they need money put into a Treasury fund under the discretion of secretary Mnuchin though.

Why do they think they need the money? This isn’t clear either but it almost certainly has to do with the Federal Reserve’s net worth. It is a common trope of mainstream economists that it is very important for the central bank to have a positive net worth. If their net worth goes negative, then it should be “recapitalized” by the federal government. Ulrich Bindseil and co-authors summarize the main arguments for why a central bank’s net worth matters:

• The staff and decision making bodies of the central bank have incentives to get out of the negative capital situation by lowering interest rates below the neutral level, which in turn triggers inflation, and eventually an increase of the monetary base up till positive capital is restored.

• The markets will have reasons to anticipate less stability-oriented behaviour of the central bank, which drives up inflationary expectations.

• The holders of the monetary base may also feel uncomfortable from the mere risk of losing their money in case that the central bank loses its right to issue legal tender ñ even if this central bank would never be tempted to trigger inflation.

Yet, this is likely the motivation behind the nearly 500 billion dollars the “stimulus bill” provides the Treasury to support Federal Reserve lending programs. There is no statute, court case or any other binding legal constraint (as far as I can tell at least) that requires the Federal Reserve to have a positive net worth. In fact, it has control over its own accounting rules and as part of its own rules can book its obligation to pay remittances from net income to the Treasury as a “negative liability” (and thus effectively an asset) if its net income falls below zero. This is purely a convention, largely drummed up by mainstream economists. Yet real political energy is being expended to get it nearly a quarter of the total money being doled out by this piece of legislation. If they really wanted full clarity on this point they could simply include a provision that said “Losses taken by the Federal Reserve System shall not affect the mandate, authority or independence of the Federal Reserve System regardless of any measure of the Federal Reserve System’s consolidated net worth”.

The one remaining possibility is there is some legal argument that for Special Purpose Vehicles created along with these facilities to truly be creatures of the Treasury (or that they qualifies for 13(3) lending) they must be capitalized by the Treasury. However, even if that is the case it's hard to see why that would require any specific level of capitalization. Each SPV associated with a specific Federal Reserve facility could be capitalized by a single dollar. It really does seem to be the case that Congress people are taking large political hits for an irrelevant accounting gimmick.

This accounting gimmick is far more dangerous than the platinum coin because it conceals what is going on to the public rather than reveals it. If we really want everyone to be on the same page regarding the Federal Reserve’s net worth, independence and mandate but feel a positive net worth is absolutely necessary there’s only one solution. Congress replaces this 454 billion dollar slush fund with a bigger, better trillion dollar platinum coin which it orders transferred to the Federal Reserve to preserve its net worth. It would be absurd of course, but less absurd than what the legislation being voted on tonight already does. Or you know, we could forget about the Fed and use fiscal policy instead.